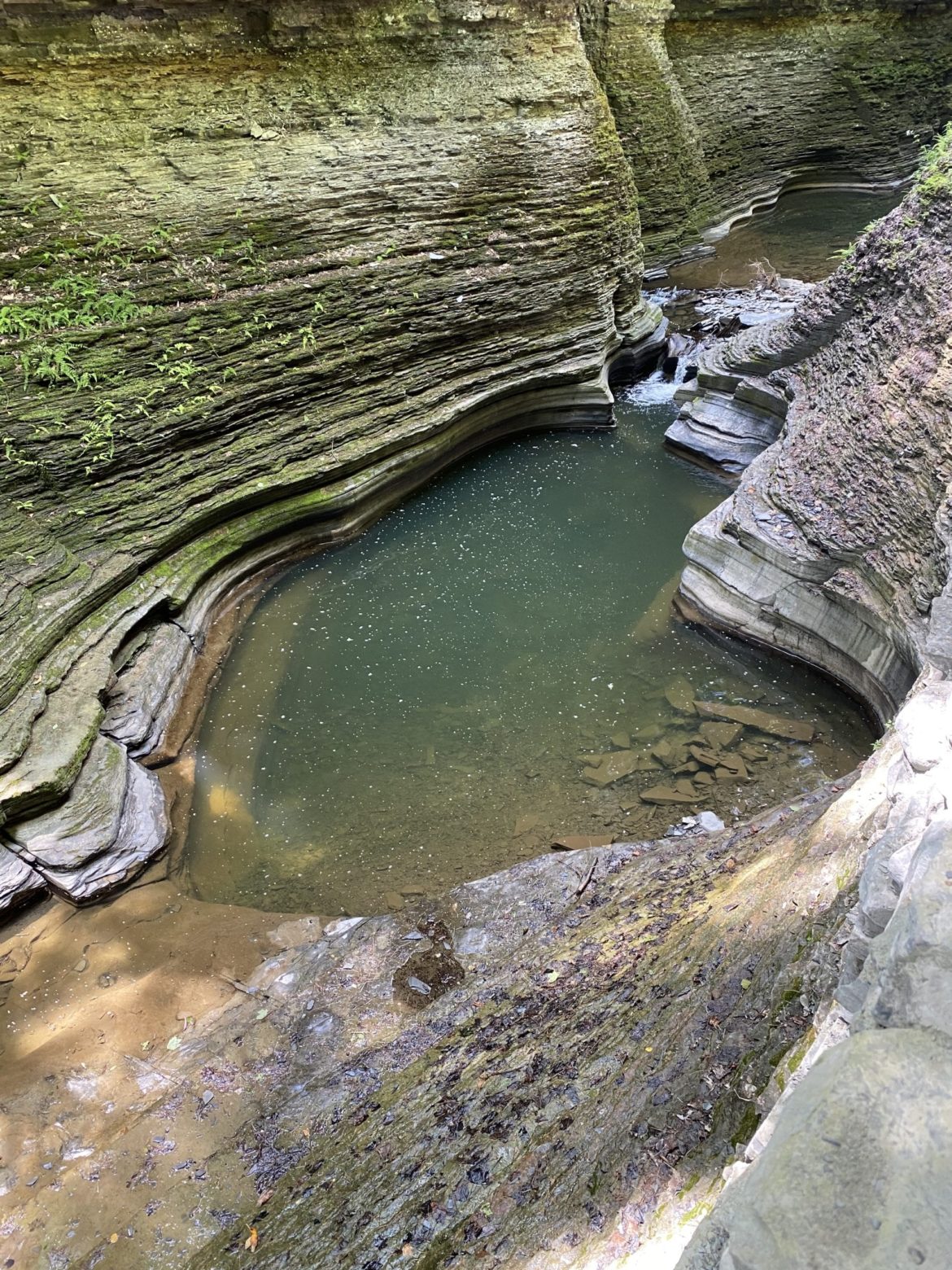 Day Three  What a sleep – all that fresh air tired us out!!  After a nice slumber we started the day at Ithaca Bakery, coffee was not very good and the interior had us very confused, but the bagels were great.  We then hopped on the Cayuga Waterfront Trail in downtown and strolled along the water for two miles.  We had great views of some rowers in the inlet, flocks of geese, and the empty farmer’s market.   We went back to the hotel to get ready for the day.

Wanting to see another of the area’s glacial lakes, we headed to  Seneca Lake to Watkins Glen State Park – reputed to be the most popular of the Finger Lake State Parks, it has 19 waterfalls that descend 400 feet of the two mile scenic hike.

We started at the South Entrance to the park and headed to the Lily Pond and then the suspension bridge.  We picked up the very popular Gorge Trail which ran along the creek.  It was spectacular!  Truly amazing to be in the gorge seeing waterfall after waterfall.  At the end of that we hopped on the Indian trail and took a detour to a neat cemetery with intricate headstones that overlooked the lake.  We ended up at the newly refurbished visitors center,  but that was still 1 mile from the car!  Back up the hill to the South Rim trail that connected us to the entrance to our car.

We decided that a nice hike again should be rewarded with some wine and fine food so off we went to Fox Run Winery on the northern end of Seneca Lake.  We tried a flight of wine, Phil went with red and Laura with semi-sweet white.  Again, we found several bottles that we loved and another half case ended up in our backseat.  Phil needs to recalculate our weight and balance on the way home!  Lunch was another vegetarian feast (grilled portabello mushroom  sandwich and a fresh corn caesar salad) with a glass of wine overlooking the lake.

A winery employee told us a must do in the area was a Mennonite run creamery that made duck egg ice cream served in flights.  Off we went, again to sample the local delicacies.   It did not disappoint:  our flight was dairy free coconut crumble, chocolate jalapeño, french vanilla and cookies and cream with real homemade cookies.  Phil got to see the ducks and we left happy and full.

We decided we needed one more waterfall to close out our day and ended up at Robert H. Treman State Park which is just outside of Ithaca. We took a short walk to the lower falls which is also a very popular swimming hole.  You can picnic nearby and swim right up to the base of the falls.  We opted for observation after a full day but it was still neat to see one of Ithaca’s top 10 falls.

Day Four Today was another good weather day, we have been lucky with the weather so far and the blistering heat has subsided. At daybreak Laura was up and after managing a couple cups of hotel room coffee, I bring my own instant espresso, we went out for a run down the main road past the state park then off on a nice side road with old houses and neat little farms. I should have taken some pictures of those but didn’t bring my running waist band so I didn’t have my phone with me.

We had breakfast back at the hotel room from the food stash pictured in the day 3 gallery; its nice to have a small refrigerator in our room and plenty of food so we only have to eat out one meal a day; especially with everything going on.

After that we hit Best Buy for an iPhone Tripod and our first falls for the day; Ithaca Falls. It was a very short walk from the parking area but so far the fall with the most water flow. Given the heat all the falls are at their low flow time. Then is was off to Cayuga Lake for 2 hours of kayaking; my arms and shoulders are feeling it! It was windy so we paddled up the river out of the wind and back then upwind and along the shore. That way once we were tired the route home to dock was with the wind.

By then it was 3 p.m. so we started looking for our lunch/dinner. Laura initially found a cider house but I was reluctant since I’m not known as a big cider person. We kept looking through the Ithaca guide but found most places take Monday/Tuesday off or don’t server food on those days. So after calling around we decided to give the Finger Lakes Cider House and Good Life Farm a try. WOW it was one of the best places we have been so far.  Now I love the wineries but this place was a complete farm to table organic farm with the best cider; I felt like I was on a work trip to Germany at one of the old cider pubs having dinner. We each had a flight of cider, dry for me and sweet for Laura. We then ordered food and sat outside next to the greenhouses and strawberry field with an expansive overlooking view of the lake and a cool breeze under a high overcast sky.

After that we drove to Lick Brook Falls. There were said to be upper falls and lower falls. We drove up a steep long road and found the parking area. As we began to hike I began to worry that this might turn into a hard hike. The trail was beautiful but the gorge had very little water flow. After awhile we found an overlook that I thought might be one of the falls but wasn’t sure; it was beautiful but not much flow at all. We continued down and that elevation began to steepen considerably and all I could think of is that this is going to be quite a hike back up to the car at the end of the day with a full belly. We actually passed the huge lower  falls but didn’t realize it due to the low water flow. Considering the steepening terrain we then decided to stop and turn around, hike back up, and drive to the lower entry. On the way back up we could see better and found a couple of side trials with lookouts that confirmed we had reached both falls. Oh my so glad we didn’t continue down that steep trail… I’d probably still be out there, well not really but I’d be a whole lot tired right now.