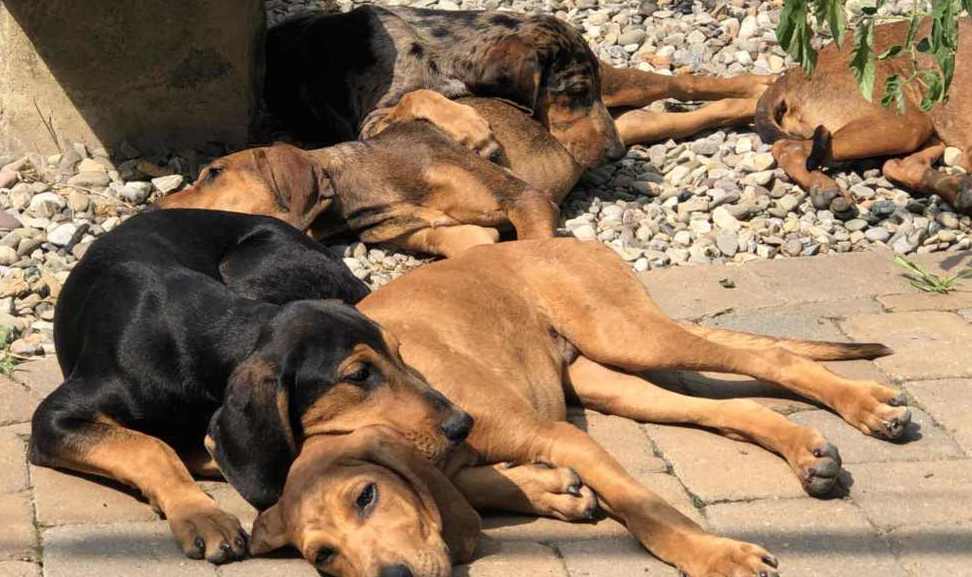 HoundPilot got a call about the Missouri 6 from AMMAR (Appalachian Mountain Mantrailing and Rescue) and sprang into action!  It was a long flight that Phil completed with the help of a friend, Steve Richter who owns his own plane. Due to strong winds and the long distance it would be an all day effort.

We didn’t know much about the 6 Leopard Hounds other than AMMAR had been contacted by Cathy Selle aka hound-angel who had heard about the pups situation.

It seems the pups were about to live a life on the end of a chain or worse.  It took some convincing, but the owner eventually agreed to give up these six puppies to the rescue.  AMMAR called HoundPilot and we were more than willing to help.  The weather cooperated and the flight was completed without issues.  Transporting six 30 pound puppies in two crates in the back of Cessna was easier then expected.

Due to getting in after midnight, the pups overnighted at HoundPilot’s home.  Talk about crazy – six wild and hungry puppies in a small house and backyard.  But we set up two crates in our living room and the tired puppies happily piled on top of each other and slept.  Mrs. HoundPilot slept on the sofa to keep the crying to a minimum.

The next day AMMAR came to our house and the six foster parents came to pick up the hounds, all of whom were named after country singers.  They were microchiped and foster agreements were signed.   A few have been adopted and others are still looking for their furever home while living with their gracious foster families.
Update: Happy Life
Look Cathy make little packets with each puppy’s picture on the front.
Prev
Next
Like what you see? Share it with someone.
Philip Allen
Blog